The Simple Elegance of Gantt Charts in Project Management

Often times, the best solutions for planning and organizing are simple, basic, and easy to understand. There are countless project management tools available to organizations. While many of the more complicated tools are effective, they can be arduous, time-consuming, and difficult to use in communicating the essential components of where the project stands.

So why not implement something tried and true? Something easily understood. A project management tool that has an elegant simplicity! A method that has a proven track record of success for over 100 years (and counting!) Enter the Gantt chart. Named after its creator, the Gantt chart is a visual representation of the project organization that shows tasks and tracks them over the course of time. This project management tool is used by a variety of industries, including marketing, construction, IT and development, engineering, product development, manufacturing, government, public works, healthcare, and telecommunications.

A little bit of context for the Gantt chart

The Gantt chart is named after Henry Gantt – the man who is responsible for its development between 1910 and 1915. The charts allowed for tracking project schedules via a bar chart type of visual aid, which was considered quite revolutionary and influential at the time. In fact, the United States military made use of the charts during the first World War. Henry Gantt himself was actually retained by Brigadier General William Crozier to analyze and develop charts to track the ordering of arms and munitions that skyrocketed in 1917. Specifically, Gantt was interested in charts that would help analyze promise versus performance. Eventually, as his work proved fruitful, General Crozier expanded his use of the Gantt charts to help with the development of naval aircraft and the United States arsenal.

Initially, the charts were made using paper and had to be restructured entirely if there was a change in plan or progress. Since then, computers have allowed for instant and innumerable changes making Gantt charts all the more effective. It is impressive and noteworthy that this process has been effective across a long span of time and has thrived after decades of technological advancements.

Benefits of using the Gantt chart

Gantt charts have stood the test of time because, despite being relatively simple in structure, they can convey tremendous amounts of information in a compact and easily digestible view. In a world that sometimes feels like it is constantly driving toward more complicated solutions, there is always a demand for simple and clear products. There are concrete and proven benefits for Gantt charts that deserve serious consideration. Some of the benefits of these charts include, and are certainly not limited to:

Gantt charts are most commonly created using Microsoft Excel but there is a variety of excellent Gantt based software that automates many of the functions that a project manager would need. Having templates pre-loaded in software greatly reduces the workload projects managers would have in creating a model from scratch.

The basic premise of the Gantt chart is that tasks and time are tracked on the vertical and horizontal axes with bars representing each task’s duration. Project tasks to be completed are listed on the vertical axis. These data points can include not only the task name itself but also the name of the person assigned to the task and the status of the task.

The horizontal axis is used to track the time frame for the completion of the tasks. Where the bar starts to represent when the task should begin and where the bar ends marks the goal for completion.

What really makes the Gantt chart unique is a third function, which shows the dependencies between the tasks. This is marked by an arrow drawing one task to the other. This is useful since some tasks can’t begin without another being completed.

Understanding these three components of the chart makes it very simple to read and explain. Rather than a random mix of bar charts and arrows, you can begin to see timelines and interrelated, dependent tasks. It is the combination of visual display and simplicity in the concept that makes the Gantt chart such a powerful project management tool.

What are the most effective uses of Gantt charts?

Due to the simplicity of design, there is a corresponding simplicity to the chart’s use. The Gantt chart method really boils down project management into its core components and only tracks the essentials. This makes clear a handful of specific uses that really stand out for Gantt charts.

1 – Tracking progress and status – With clear task listing, ownership, and timelines, checking in on the chart and seeing where things stand are simple. Using a Gantt specific software or an Excel template for the chart allows for easy updating. It turns the chart into a living, organic document that can show real-time status for every project task being tracked.

2 – Make adjustments and reset timeline expectations – As much as project managers would like everything to go perfectly to plan and on schedule all the time, the reality is that rarely proves to be the case. Things happen. Roadblocks appear. Project requirements and scope can change at any time, depending on the needs of the client. The flexibility of a Gantt chart allows for a quick analysis of how timelines maybe adjust in response to these unforeseen bumps in the road.

These adjustments to timelines and expectations are what set great project managers apart from average project managers. They are inevitable, and the ability to quickly respond to challenges and adjust expectations have a direct impact on the success of the project. Gantt charts are an effective visual tool for making adjustments to tasks and timelines and being able to see their impact not only on their dependent tasks but on the project as a whole.

3 – Identify key milestones – A huge benefit of having tasks outlined in a visual format is that key milestones stand out. It becomes very easy to see where critical tasks are completed and how they can set up other tasks they lay the groundwork for. Reaching milestones at key points in a project ensures that the team is on the right track and gives everyone a reason to celebrate. Clearing a milestone and moving on to the next is great for team morale!

4 – Allocate resources more efficiently – Being able to visualize the list of tasks, their timeline for completion, and what is dependent on them is very useful in determining where the teams’ resources should be focused in any one moment. For instance, if there is one task in particular that appears to be behind schedule and has two other tasks depending on its completion, a project manager can easily identify this bottleneck and shift staff, money, or technology to that task in order to focus on its completion.

5 – Break the project into pieces, but also see the whole picture – Projects can be overwhelming when you stand back and take them in as a whole. This is particularly true when working on a project that is spread over a long period of time. They can begin to seem insurmountable and never-ending. This often leads to burnout with the team and a warped sense of timeliness for the completion of individual tasks. Gantt charts are particularly useful for managing this as they can break large projects down into bite-size chunks that make the project seem more manageable. Accomplishing smaller tasks in succession can boost team morale and inspire the completion of the entire project.

6 – Clear accountability for everyone on the team – A tremendous benefit of the dependency function in Gantt charts is that their mere presence creates a layer of accountability. The individuals responsible for a task are aware of the importance of their role when they see that others on the team are dependent upon the efficient completion of their work. No one wants to be the weak link to the chain. In this way, the dependency attribute acts as a motivator. On the other hand, this also creates accountability for the rest of the team to aid and support any members who are struggling to meet their deadlines. This is important and speaks to the reallocation of resources discussed earlier.

7 – Effectively communicate with and lead remote project staff – Remote work is becoming more and more commercial and, at the time this article is being written, has become a necessity for most businesses in the midst of the COVID-19 global pandemic. In any situation where you have a portion of your workforce telecommuting, clear communication can become increasingly important and increasingly challenging. Gantt charts can work to ensure that everyone on the team, regardless of their time zone or location, can have a very clear idea of where the project stands at any given time. This keeps remote staff in the loop and gives them a visual, tangible piece that ties them to the rest of the team despite being physically separated.

With the Gantt chart process for project management is very well established and time tested, there are considerable resources available for learning, developing, and implementing the process into your organization. A quick Google search will provide a plethora of information, including templates for creating your own chart in Microsoft Excel, countless software based on the Gantt chart’s principles, frequently asked questions, strategies, best practices, and out of the box ideas for how to use them. In short, if you go the route of a Gantt chart for a project, you’ll have a wealth of inspiration and best practices at your fingertips. 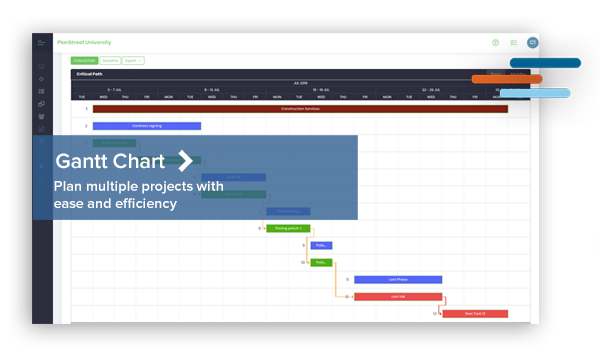 Are there any downsides to the Gantt chart?

As with any organizational tool, no matter how many advantages there are, there will be some aspect that could be improved or may serve as a deterrent to its implementation. While Gantt chart criticisms are frankly few and far between, some areas are less than ideal. These downsides primarily deal with upkeep.

First, the Gantt chart can be a bit cumbersome to update. With items being interdependent and time-sensitive, one simple change can force other changes down the line. In the old paper method and, to a lesser extent, Excel templates, this takes some time. Many types of project management software will automate many of these changes making the updates a bit less tedious.

Viewing the entire timeline can be challenging as well. Depending on the format you are using for the Gantt chart, a project with a lengthy timeline requiring a lot of tasks that may force the project manager to scroll quite a bit to see the tasks. This can make for a less visually pleasing presentation.

Is the Gantt chart right for your next project?

So you have a project coming up, and you’re looking for a fresh approach to take with managing it? If you’re looking for something that is simple, easy to communicate, highly visual, and has a proven track record, the Gantt chart may just be the route to take. The fact that it has been in use for over 100 years and has been successfully applied in industries ranging from the United States military to IT development should instill some confidence that this tool can be of use.