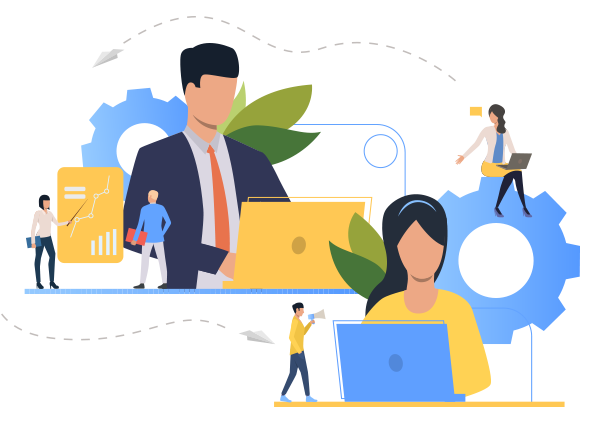 What is the Change Management Process?

An organization goes through change due to many reasons such as technological implementation, compliance initiatives, improvements in customer service, etc. Change is the door that opens your organization to new opportunities for growth, expansion, and sustainability. During a period of change, each employee in every team of the company goes through a transition. For making the transition smooth, a proper change management plan needs to be in place. For project managers, there are several tips, models to be followed to implement change management successfully.

Although there are many change management models, three of them are popular among top companies. Organizations mostly implement one of the three models given below.

Kurt Lewin invented this model in the 1950s. The model is easy to use. Thus, it is widely popular among companies. However, it takes time to implement. The model defines three stages of change. The three stages are:

Unfreeze – The period of unfreezing aims to eliminate fear and resistance to change. Any new policy or technology will face some resistance initially. The objective is to motivate them to accept change.

Transition – After initiating change, the organization remains in the transition period. It lasts for some time, depending on the kind of change. For successfully crossing this stage, able leadership is necessary.

Refreeze – After the period of change, the staff gets accustomed to new guidelines. The company gains stability again. This final stage is called refreezing. 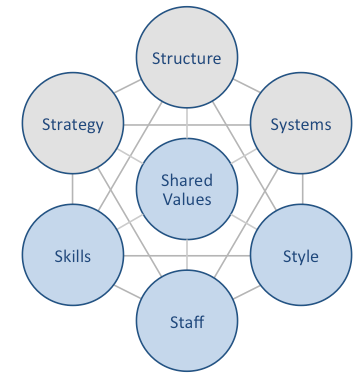 The model is a result of the collaborative efforts of Robert Waterman, Tom Peters, Richard Pascale, and Anthony Athos. It was created in 1978. The model specifies 7seven factors that act as agents of change. The factors are – shared values, strategy structure, systems, style, staff, and skills. Although it is a complex model, some companies adopt it as it combines rational and emotional components.

The creator of this model is John Kotter, who was a Harvard University professor. The model emphasizes on preparing the employees to welcome change. It is easy to implement – it is adopted stepwise. It has eight different steps that describe the process of accepting and getting accustomed to change. Change is difficult to manage and implement. The model makes the transition a straightforward process.

The steps in change management

The following steps are a basic blueprint that can guide managers through the change. Each change is different and comes with different challenges. Managers with adequate leadership skills can tackle these challenges with cooperation from their teams. 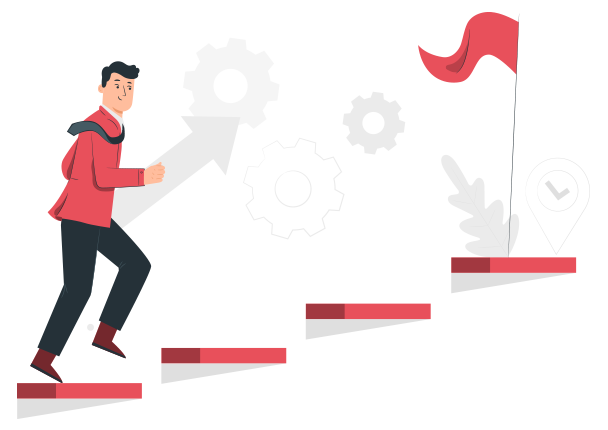 The concept of organizational change is continuously evolving. One of the major challenges in change management is navigating the human element. People are inherently resistant to change. They do not easily step out of their comfort zone to experiment with something that they are not familiar with.

Adjusting to change does not come naturally to many people. Add to this the fact that transitioning itself is a cumbersome process. The solution requires involving people from the first stage of change. Keep them informed about plans. Also, consider inputs from all the people who will be affected by the change. It can make it less daunting for them.

Supporting tools and components for implementing the change management process

Numerous models have proven to be beneficial for managing change. Some models focus on the individual transition, while some other models look at the whole organization as a single entity that is changing. You can not pick one 'right' model. You need to research the different models and adopt one that is suitable for the size and type of your organization.

Why does change fail?

Some organizations fail to adapt to change. Several obstacles stand in the way of change. What are they and how to avoid them?

Not preparing for change

Inadequate preparation is a common barrier to change. Implementing change is an expensive process. It consumes various resources – time, money, and human effort. Planning for change involves discussing the answers for questions like – Who are the employees who will be affected by the change? What kind of additional training do they need? What is the training schedule? How much will it cost? Will the training affect the ' 'employee's workflow and productivity?

Lack of flexibility in organizational strategy

When new forces of change emerge, it often calls for changes in strategy, vision, and mission. If the leaders of the organization are reluctant to modify the organizational structure to accommodate the change, they should be willing to plan thoughtfully. They also need to introduce just the right amount of flexibility, so they can bend without breaking.

Not taking inputs from employees who will be affected by the change is yet another reason for failure. If they feel left out of the process, there is a higher possibility that you will face opposition from them. It makes them feel excluded. If employees are well aware of the purpose and necessity of change, there are more likely to contribute and participate actively in it. Employee support is a huge factor in whether or not you implement change successfully.

Lack of effective communication from the leaders

During the transition period, employees expect transparency from the change management team. Maintaining transparency requires effective communication from the leaders. Although it is an inherent trait of a leader, it is more important during times of change. An opaque leadership will block out employees from the process. Exclusion leads to resistance, which eventually fails. Thus, inadequate communication is a major reason for a failed change management process.

Looking at change as a threat

One needs to have a positive outlook on change. However, if employees are not clear about the need for the proposed change or how they can benefit from it, they will perceive change as a threat rather than an opportunity for betterment. It creates undue stress on employees. Their workflow and productivity decrease. The consequence of this is again, resistance to change. Train your employees well to perceive change as an opportunity and welcome it.

When the performance drops, leaders have an urge to implement change just for the sake of boosting performance. They do not pay heed to what kind of change is needed or whether any change is required. This attitude can also lead to failure. As a leader, you should focus on whether critical processes require a change.

Embracing change involves moving out of your comfort zone. Getting the employees to accept and adhere to change is a difficult process. It may take time, depending on the effectiveness of the leaders driving the change. The following are a few tips for managing change successfully.

Define clearly the metrics for success

Everyone can be motivated to work towards change if they are aware of the exact metrics that measure success. Define milestones in your journey so that the team can have small celebrations along the way. The whole team should visualize the same goal and collaborate to work towards achieving it.

Set manageable goals in the beginning. It can help you win early on. These small wins are success stories that motivate the team to work towards embracing change. Capture every small win. Communicate it to all the members involved.

Dialogue is the key to achieve compliance from employees. At every stage of the change implementation, the leaders need to keep the dialogue going. The end of each stage should involve retrospection to determine the successes and failures. A two-way conversation should accompany the beginning of a new stage on what the short-term and long-term goals are.

Managers are the bridge between employees and the change management team. However, there is less focus on the development of the manager's skills. It can make or break a change management process. Each manager should be provided with the necessary tools and knowledge to understand what the changes are and why they should be implemented. Only if a manager is clear about this, he/she can deliver it to the employees in the right manner.

Any change will first be met with resistance. Human beings are generally resistant to change. They are reluctant to move out of their comfort zone. Make sure that your employees' struggle with change is time-bound. Expect some resistance initially and decide how to plan to deal with it. Provide a platform for stakeholders to communicate their concerns, perceived threats, and discuss the change. Engagement is key. Disregarding the resistance and hoping that it will die out eventually will not work.

Keep an eye on the individual change

For a team to accept and implement change, each individual in the team has to undergo a transition. The personal transition can be divided into three phases.

It is helpful if leaders share their own experiences regarding the personal transition. They should show their team that they are committed to changing their behaviors while accepting change.

Involve all the stakeholders

Consider the needs of the people involved in the process of change. Make stakeholder-specific plans so that you understand their perspective. Leaders should be aware of the perspectives of employees, partners, customers, and managers.

Identify a proven process that is suitable for your organization. Following a well-defined process can help you get to your goal as a team. The process acts as a blueprint for implementing change. It serves as a reference to determine the progress in implementation.

Four great examples of change management in the history of business

Discussed below are the case studies of some companies that successfully implemented change. Their stories give insights into best practices regarding change management. Many organizations have achieved this, but these companies are outstanding examples.

In 2004, ' 'Shell's share prices hit rock bottom due to an oil reserve crisis. Then the chairman of the group, Sir Philip Watts, quit abruptly. The man who took over, Jeroen van der veer, believed that a complete transformation was required to survive the crisis. They followed a standardized process for all branches across the group. Implementation of these changes would result in some countries losing their market share. It was a loss in the short term. 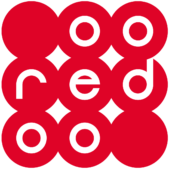 Qatar is the world's richest economy per capita. In 2005, the chairman and CEO of Qatar's state-owned telecom company Qtel together started a wild acquisition spree. In 7 years, they managed to own 17 telecom operators in the Muslim world.

In a major shift of strategy in 2012, Qtel decided to grow through integration rather than by acquisition. All their diverse telecom brands merged to form a single entity – Ooredoo.

The job of popularising this new brand was handed over to a change management team. They identified what their brand stood for. They marketed Ooredoo as a brand that stood for greater communication freedom in the Muslim world and gave a voice to women and rural communities.

In February 2013, Ooredoo launched with Lionel Messi as the global ambassador. It was a huge success. Today, Ooredoo is a leading international brand in the telecom industry.

Persistence and positive approach towards a disruption helped Paul Geddes establish a stand-alone insurance company Direct Link Group. The separation journey lasted 18 months. In this case, the team did not have a plan B. They inspired everyone to have a shared sense of controlled urgency so that they were on track. The implementation as a success. Geddes succeeded in establishing a viable stand-alone company.

In 2008, Santander decided to make a mark in the UK banking sector. The proposed strategy was the acquisition of heritage-centric financial institutions in the UK. However, bringing people from different institutions together would be a Herculean task. Also, expecting people to let go of their old ways and embrace the changes in the banking sector would be challenging.

All stakeholders were brought together and informed about the change. They implemented two-way communication to understand perceived threats and risks. The action was taken to mitigate risks. Careful management resulted in successful integration.

Santander finally launched in 2010. In a short duration of three years, it went on to become one of the leading retail banks in the UK.